A Punk Tale of Two Cities 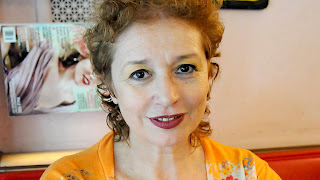 These days, Vivien Goldman teaches about Punk at New York University and they call her The Punk Professor. But back in the times we're speaking about, from about 1976 to 1982, when she was one of approximately two female punk rock journalists in the UK, the whole idea of teaching Punk in a university would have been laughable. Writing for what was then a thriving weekly throng of music papers, Vivien found herself embedded in the Punk community, sharing a flat with Chrissie Hynde, forming the Flying Lizards, being produced by John Lydon. She is an absolute authority on the musical, social & political impact of punk.

She has also written extensively on reggae and its relationship with Punk. As a popular anti-authoritarian mass youth uprising, Punk, was one of the most significant social movements of the late twentieth century, and now kids round the world, from Bahrain to Indonesia to Russia, still naturally turn to the punk genre almost automatically, to express their rage. The yell of our first sort, sharp punk shock is still echoing and at this rate, will never die.

A Punk Tale of Two Cities answers a question that Punk people love to debate - where did punk begin? London or New York? Other cities try to stake a claim - Paris, for example, or Los Angeles. But everyone knows they're non-starters, really. The tension, the energy of punk, crackled between London and New York.

In this show, we'll rip the duality apart and see where punk really started. Or not. After all, Punk was never supposed to be an easy answer.


Along the way there are new insights from those who shaped Punk on both sides of the Atlantc - John Lydon, Talking Heads, Neneh Cherry, The Slits, Don Letts, Chrissie Hynde, Public Enemy, Lenny Kaye, Dennis Bovell and Patti Smith.
Posted by Vivien Goldman at 9:12 PM